Scale of data generated and used is astronomical in the internet. It becomes fruitless to figure out this on yearly, monthly even day basis. The scale is so mammoth that even 1 minute data will send your head spinning.

What happens in 1 minute on internet

The humble # hashtag has turned 10 on the twitter. An average of 125 million hashtags are tweeted each day. In fact the makers of Twitter had not even added the hashtag feature as it was thought it to be too nerdy for common people. Hashtag was used earlier in c-language in the file header to include another file in the present file. For example there is a library of files called header files which are readymade pieces of software to be used in the present program.

It was the users who discovered that tweeting a term with # as prefix makes the term a clickable link. This way , not only does the post get categorised under a certain topic, it also becomes searchable.

Clicking the tag shows users all the tweets containing the tag, making it easier to follow a discussion. In tech parlance, such public tagging is called “folksonomy which is defined as “a user-generated system of classifying and organizing online content into different categories by the use of metadata such as electronic tags such as hashtag”

Mysore is a famous city in Karnataka. It has a rich history and also pleasant climate. Due to this there are always flowers everywhere. It is city of gardens. There are numerous monumental buildings and temples. Near by is the Sangam where Cauvery river segments again merge. Also the famous palace of Tipu Sultan and his fort which was surrounded by a deep moat on all sides. But he was killed there.

I came across these shrubs first time in the campus of CFTRI Mysore. The institute is doing  research to increase the yield of flowers and seeds. Seeds are used as natural dye for food coloring. Seed coating contains carotenoids which impart red color and terpenes give the scent.

The trees are natives of South America. Small numbers grow in Karnataka and adjoining states of South India. Flowers come in bunches and have tough spiny hairs. When you open the the flower case, inside are seeds and your hands will be colored red with the dye. South Americans used it for many purposes like lipstick, body painting and medicine. I took some photos. 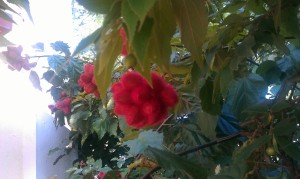 It is a scientific fact that all living things evolved from the simplest single cell bacteria. These are called cyano-bacteria or green algae. They were the first harvesters of sun energy using photosynthesis and making food for themselves. Thus the food comes from the Sun.

Slowly, the life diversified, especially after the introduction of oxygen into the atmosphere thanks to these green algae. Living beings evolved which cannot make their own food like plants but use the food prepared by the plants and burn it with oxygen.

Then Darwin came and after a massive study and observations in the Canary Islands announced that higher forms of living things evolve slowly from the lower forms. This is a consequence of struggle for survival and survival rate of the fittest or the species which are capable of modifying themselves according to the environment are the best. Humans are a mere speck in this diversity majority of which is staked by the bacteria.

From water to land and from crawling to walking on four limbs, human freed their forelimbs to use them as tools and also stand upright which helps in running away from danger, following the prey and gain the greater ability to watch up to far away distances to locate the danger as well as food. But we have to pay the price for this in the form of backaches, diseases and difficult child birth.

Natural selection continuously sifts the best from the individuals of each generation. But this sometimes occurs clumsily, as old parts and genes are co-opted for new roles. As a result, all species inhabit bodies imperfect for the lives they live. Our own bodies are worse off than most simply because of the many differences between the wilderness in which we evolved and the modern world in which we live. We feel the consequences every day. Here is the first.

Our cells are weird chimeras
Multicellular life started when two cells merged and fused into one. The hunter cell swallowed the prey cell and encapsulated it. Then the prey became the mitochondrion. This is the machinery which provides the cell energy and makes possible its survival. Most of the time, this ancient symbiosis proceeds amicably.

But every so often, our mitochondria and their surrounding cells fight. The result is diseases, such as mitochondrial myopathies (a range of muscle diseases) or Leigh’s disease (which affects the central nervous system).

Other handicaps shall be discussed in subsequent posts.

After so many days, I am surprised that I am able to open my blog. It has been fully restored. Statistics also indicate the sudden rise in the viewer although I have not been able to open it for a long time. I am surprised as well as feeling a peculiar kind of relief because so much my entries were there. It seemed that someone has looted me at gun point.

Censorship, if all, the authorities think unavoidable should be applied judiciously not en masse. At least they must check what are the contents of the blog and whether they are harmful. So many artists have suffered untold punishments for their works. Sometimes it is from the authorities in the power and at others religious, regional feeling seem to be violated by the writings.

Many a times I thought in the past, first compose the draft of the post in the word processor and keep a copy of that for safety but never doubted that such harsh things like blocking of the innocuous material blog can happen in India. India has been exemplary in terms of liberty except a few aberrations. The censorship also made us realize the plight of artists in the intolerant countries. It was like snatching of the liberty which we have become habitual with and started taking it granted.

Anyway, today I am very happy that things seemed to have become normal again.

God‘s creations are not comprehensive. His ways are an enigma for us to understand. Even a tiny event taking place in the nature is beyond our understanding. How the life is sparked in the body made of flesh. I think many times that if we assemble all the organs into a human body, can it come to life by itself?

A simile can be drawn from the modern day computers. A computer is assembled from the hardware like CPU, mother board, storage media, multimedia. Even after assembling the hardware, it is just a lifeless piece without any use until it is booted. Booting involves a small program called “Bootstrap” which makes the machine to come to life and starts the vital functions like loading the operating system which readies the computer for doing useful work.

Similarly, there must be something, some spark of energy which the God must be infusing in the lifeless body and bringing it into the action. The body becomes ready for performing various functions.

A computer can be rebooted if there is some hitch in the programs. This can occur so many times in the life of a computer. But in case of living beings since the time of booting till the end of life, this happens only once.

It is rightly said that there are dissolves in the reel life but the real life goes on.