Can we imagine any food without salt? In addition to the taste it adds, Salt is an essential nutrient for the human body. It is an electrolyte which helps the transmission of the messages from different parts of the body to the brain and vice versa. It is present in the cells. Any imbalance in its concentration whether in the form of deficiency or excess can play havoc with our body. When dehydration occurs, the salt has to be replenished by the intake of oral rehydration solution. It is lost from our bodies during perspiration and blood becomes thicker and our bodies require water.

In addition salt is used as preservative for pickles and other foods. It acts as a barrier to the bacteria which attack the food and decompose it.

Salt comes from the evaporation of the seawater collected in the salt pans. After water evaporates the salt is left behind which is then made to undergo the processes of purification. Those who live in the urban areas and especially near sea coasts never feel it’s importance.

But still there are people living in the remote areas where access to this commodity is impossible. Some of such communities live in Kenya. These tribes, as the saying goes : “Necessity is the mother of invention ” has developed a way to compensate this by extracting the salts from the REED STALKS.

Bunches of river reed are cut into smaller pieces and dried on the hot stones for about a period of 3 days to reduce the inherent moisture. Then the stalks are put on very slow fire. When organic ingredients burn, the ash is left behind. Ash is collected and boiled with water and filtered to get pure salts dissolved in the filtrate while impurities are left behind.

The filtrate is then boiled till only the salt is left behind. Sometimes they add a pinch of pepper powder to add flavor to it. 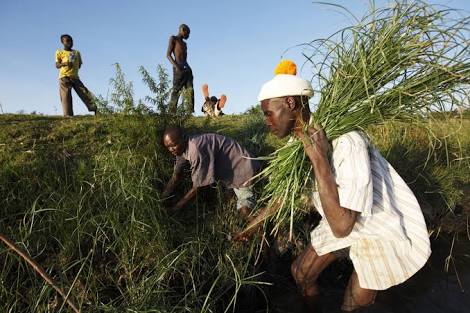 This picture has been taken from the beautiful website from Luke Duggleby an ace photographer. URL to his website is given below.

(if the picture is not for free use, I will delete it)