In Hindi it is called Kaans. It is a perennial grass and grow in abundance in the dry river beds and adjoining spaces. It is rhizome and spreads quickly claiming the empty soil. Ghaggar river flows near our home in Panchkula, Haryana. It is seasonal river nowadays though once upon time as the history tells us it was a powerful river flowing till sea and along with another river called Hakra originating in Afghanistan and flowing down to Punjab and Sind, Ghaggar formed a river systems called Ghaggar Hakra system. But now it is mostly dry with small amount of water flowing in the deepest channel.

The grass is found all over the northern plains of India upto Assam. Generally it grows in on the edges of the rivers. This grass has claimed the empty dry bed of the river. At this time of end of August, it has begun to bloom into white colored flowers stalks and whole of the river bed resembles a white sea. It looks beautiful though. Blooms are just in delicate condition and shall go on to become more thick in the coming months. Then they will dry and their color will change to slightly brown and finally they will begin to disintegrate.

In Bengal where it is called Kash Fool, it heralds the onset of Puja festival.

Here are some photographs of the flowers. 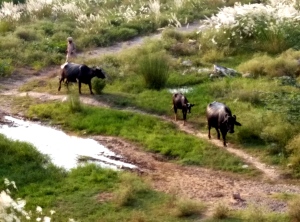 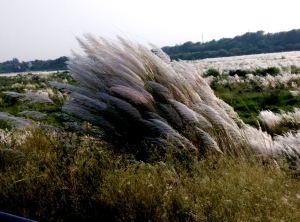 One thought on “White river”