Those who live in Punjab must have seen the picture of tenth Sikh Guru Gobind Singh. He is depicted riding a horse with full regalia and a falcon sitting on his hand. The guru has in fact a title given to him as “Baajan Wala”. Baaz is the name of the falcon he is holding. The falcon is called Goshawk and Baaz is the female of species. Its counterpart male is called “Jurra” in the Punjabi. Also the female of the Baaz is much larger in size and esteemed for its preying prowess. 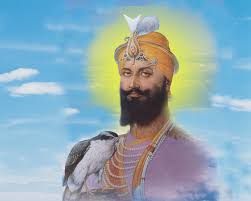 The falcon was a prized possession for the royalty and the affluent in the days of kings and princes in Indian subcontinent. One must have seen the pictures of Moghul kings holding this bird. It was trained for killing. The bird is prized because it has a very sharp eyesight and while swooping down on the prey whether in the air or on the ground can adjust its trajectory according to the changing location of the target. It is not impeded by the obstacles coming in between. It can hunt large prey such as hare, Macqueen’s bustard, crows, owls, herons, ducks, geese, and even cranes and large game birds such as partridges, junglefowl, pheasants. It commanded very high price in those days.

Goshawk is a large hawk, almost reaching buzzard size. When seen close to it has a fierce expression with bright red eyes and a distinctive white eyebrow. Its broad wings enable it to hunt at high speed, weaving in and out of trees, and its long legs and talons can catch its prey in flight.

It was thought that in the plains of North India it migrates from the Himalayas but this does not seem to be true because of the dwindling numbers. It has been declared the state bird and efforts to breed them in the captivity by the Punjab Government have not met with the desired success.