This blog is about observations around and thoughts which come to the mind.

It has become a tragedy of epic proportions. The loss in terms of precious human lives, property and environment is bigger than suffered in many wars. The floods which occurred in June 13 coincided with an event called “Char Dham Yatra” in which many hundred thousands have gone to the religious places in the Himalayas falling in Uttrakhand like Badrinath, Kedarnath. Thousands died and many thousands were trapped as the floods smashed many roads to smithereens blocking the way to return.

So many hotels and guest houses fell like house of cards. As can be seen clearly in the video footage shown on TV channels these were built on the edges of the river banks without taking any precautions about safety into consideration. They fell into deep trenches and furiously flowing water and were washed away. 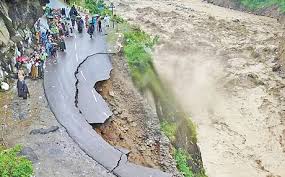 The cloud bursts are a common phenomena in the region causing great distress and loss of property and lives. One of the reasons may be that roads have been built in an unplanned manner. The number of vehicles carrying heavy loads of pilgrims or tourists have increased very heavily putting the pressure on these roads and weakening them. They were thus unable to withstand the onslaught of the flood fury.

Why people go in so many numbers to these places? This region is the home of many Gods and dotted with several temples. Most famous of all  these belong to the Shiva the God who is the source of dynamic forces of birth and deaths. By bringing end or death to physical form or pain or unhappiness, He transforms and purifies the things and since in Hinduism, soul is immortal, death is the way forward to life.

Also many of our saints like Kabir emphasized that there is no need to search for God outside in temples, Mosques or Jungles because the God is within us. But human beings are frail and gullible and choose the method which is visible or apparent like visiting a temple. Not only that, auspicious dates are announced by the priests and people in thousands begin congregating towards the said places.

This tragedy has caused great setback to the progress of the area. It has incurred losses of billions of rupees to the Government. So many army men, helicopters and road builders have been pressed into day and night service to rescue the people. Many families have lost all the members. It will take numbers of years to bring back the normalcy.

There are entry points which can regulate the entry of people into the region. It is a very sensitive issue to stop people from going en-mass for the fear of curbs on religious liberty, it is therefore for the people to think and learn the lessons. Since last some years, the weather is becoming very unpredictable and it is better to not to risk the adventure and be at home and worship the God at home.