Third most important group of dyes is the Vegetables dyes group. Although they can be obtained from almost any plant but most important were madder, woad, and indigo.
Madder (Rubia tinctorum), 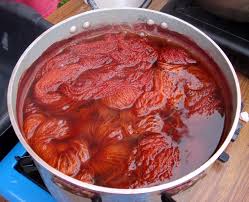 a bright red dye, comes from a plant of the same name also known as “dyer’s root.” Though its origin is lost in antiquity, it was used to dye the wrappings on Egyptian mummies. It is said that Alexander the Great used madder to help him defeat the Persians in 350 B.C. He had many of his soldiers dye their cloaks with splotches of red and stagger onto the battlefield. As the jubilant Persians fell on the “badly wounded” enemy, they were soundly defeated. Madder appeared in Europe in the seventh century and was the dominant red dye for more than 1000 years. It provided the red for the famous British redcoats during the American Revolution. The chemical responsible for the color is alizarin.

Woad, a dye from the European plant Isatis tinctoria, has been found on some of the most ancient textile fragments ever unearthed.

It was used to dye the robes of the high priests of Jerusalem in Biblical times, but it was in Europe that it was extensively cultivated. The dye was obtained by first air-drying the woad plants and grinding them to a powder. The powder was then moistened, placed in a warm, dark place, and stirred frequently. Several weeks of fermentation produced a black paste, from which a blue dye was extracted. The European woad plant had indigo as its main chemical constituent. Woad was the principal European dye for centuries, and dyers became quite skilled at mixing it with other dyes to obtain new colors. Saxon green was the result of dyeing a fabric with woad, then over dyeing it with weld, a yellow dye from another plant. When woad was over dyed with madder, a purple shade resulted.
Indigo, from the plant Indigofera tinctoria, is much richer in the indigo molecule. This dye worked its way from India to Egypt, the Holy Lands, and eventually Europe, where it arrived around 1200 A.D. Its introduction was bitterly opposed by woad growers. Many laws were passed against use of the “devil’s dye,” and it was widely believed to harm both the cloth and its wearer. So successful was the anti-indigo lobby that the dye did not become established in Europe for more than 500 years. Then King George II chose indigo for the British naval uniform, giving the world “navy blue” forever after. Indigo was one of
the few natural dyes of commercial importance to America. In 1744 Eliza Pickney grew indigo from seeds her British army officer father brought from the East Indies to the colonies. Later, the enterprising young woman persuaded plantation owners around Charleston, S.C., to grow indigo and set up the Winyah Indigo Society. This cooperative shipped great quantities of the dye to England, until introduction of synthetic indigo destroyed the market for the natural product. Today indigo has been largely replaced by other blue dyes, though it is still used as the dye of choice for coloring blue jeans.