As told previously, the dyes were made from the minerals and natural rocks. The examples of these were Ochre Dyes which are the iron oxide compounds.

Second group of natural dyes is the animal group. One of the earliest and most important of the animal dyes called Tyrian Purple was obtained from several species of snails found along the shores of the Mediterranean.

It was discovered by the Phoenicians about 1500 B.C. and became, for the next 3000 years, the most important dye of the civilizations that rose and fell in the area. The demand for mollusks rose rapidly as dye factories sprung up along the Mediterranean and west African coasts, and Phoenician traders carried the dye to Spain, France, and Italy. According to Pliny the Elder, the dye was extracted by crushing the shellfish and boiling them in salt water for ten days. Cloth was dipped in this solution, then exposed to sunlight. Due to the photosensitive nature of the coloring molecules, the yellow color changed to greenish-blue, then finally to purple. The Roman emperors prized the dye and decreed that only members of the royal family could wear clothing colored by it, hence the expression “born to the purple.” Among those who wore Tyrian purple were Alexander the Great, Julius Caesar, and Cleopatra.
Other animal dyes were obtained from insects. Kermes was a scarlet dye obtained from Coccus ilicis, a tree scale that lived on oak. Moses mentioned its use in Egypt, and other writers referred to it as captured booty in 1400 B.C. Kermes varied in color from bluish-red to brilliant scarlet depending on the mordant used. A mordant is cation of metal which forms a link between the clothe and the dye and helps adhere permanently to the clothe. It can also change the color of the dye altogether. One example of the mordant is Alum which contains Aluminum ions in trivalent state.

A dye very similar to kermes was discovered by Mexican dyers around 1000 B.C. Cochineal is derived from another scale insect, Dactylopius coccus, that lived on cactus. The insects were collected by hand, about 200 pounds per acre of cactus, and dried in the sun. The dried insects resembled rust-colored grain seeds and gave scarlet dye when soaked in water. The Spaniards learned of cochineal in 1518 A.D. and brought it to Europe, where it rapidly replaced kermes. The scarlet obtained with a tin mordant is particularly beautiful and was used until 1954 to dye the uniforms of the British Brigade of Guards uniforms. 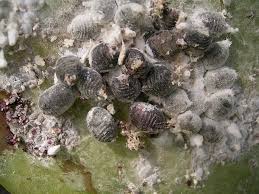