Ammonia is a chemical of great industrial importance as it is used in making the nitrogen based fertilizers. Its demand is so high that when Haber who developed the synthesis of ammonia by combining nitrogen and hydrogen using catalytic method, he was awarded Nobel prize. 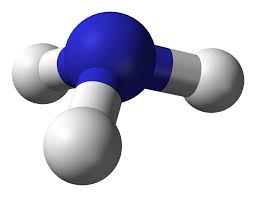 Here we will discuss its peculiar structure. Nitrogen is the central atom to which 3 hydrogen atoms are attached. But due to sp2 hybridized bonds it is not flat but trigonal prism. A pair of electrons resides on the nitrogen giving it basicity.

The ammonia molecule readily undergoes nitrogen inversion at room temperature like an umbrella turning itself inside out in a strong wind. The energy barrier to this inversion is 24.7 kJ/mol, and the resonance frequency is 23.79 GHz, corresponding to microwave radiation of a wavelength of 1.260 cm. The absorption at this frequency was the first microwave spectrum to be observed. This frequency of flipping is so constant at a given tempertaure that it was used to construct very accurate clock called ammonia clock. It was the first atomic clock constructed by NBS in 1949.

Its caption read as follows:

The Bureau atomic clock program sought to provide a spectroscopic standard capable of being used as a new atomic standard of time and frequency to replace the mean solar day and so change the arbitrary units of time to atomic ones. With such a clock, new precise values might be found for the velocity of light; new measurements of the rotation of the earth would provide a new tool for geophysicists; and new measurements of the mean sidereal year might test whether Newtonian and atomic time are the same, yielding important results for relativity theory and cosmology”

It operated with an ammonia-regulated quartz crystal and ran with a constancy of one part in 20 million.

There are atoms which have same chemical properties but different atomic weights. They have same atomic mass because number of protons are identical but additional neutrons make then different in weight. Such atoms are called isotopes.

For example carbon which has 6 protons and 6 neutrons have an isotope which have 6 protons but 8 neutrons.  They are presented as C14 and C12. Addition of protons make them less stable and many of them are radioactive. The rate at which a particular atom decays is independent of temperature, light or darkness. During decay the atom is trying to achieve state of minimum energy and produces atoms with lower atomic numbers and energy.

The rate of decay is expressed in terms of half life. For example a given weight of C14 atoms will become half in weight in 5600 years. precisely.  Then the remaining mass will again take 5600 years to become 1/4 th and so on. This property has many uses and one of the most popular one is carbon dating to determine the age of wood.

Vegetation absorbs CO2 and the same C14/C12 proportion is found in wood as in the atmosphere as long as the tree is alive.But, after a tree is felled it no longer absorbs CO2 from the atmosphere. Inside the dead wood, the C14 brothers slowly disappear, and are not replaced. So, a piece of wood from a Pharaoh’s tomb contains a far lower C14/C12 proportion than a tree that has recently been felled. This type of clock is particularly useful to archaeologists, and allows them to date wood between 200 and 20,000 years old.  The ratio of C14/C12 is measured using a ratio recording mass spectrometer.

It is the beginning of the month of April and Delhi has already become hot. The weather in India changes every 3 months. It is the spring season and soon sweltering heat will envelope North India. Dehradun which is situated in a valley between Lower Himalaya and Shivalik hills named after Lord Shiva.

We boarded the train from New Delhi Railway station at 06 hrs and 50 minutes and it is all sitting on chair cars. Due to being an AC train, it is closed with glass panes.

Soon we were hurtling through the vast plains of North India. The area is situated between two great rivers namely Ganges and Yamuna. It is called Doab meaning the land between two rivers. Naturally it is very fertile and featureless and totally flat.

There were never ending fields of wheat which looked like golden because the time of harvesting is nearing. Then there were sugarcane fields and carts yoked by bullocks and loaded with sugar canes could be seen on the beaten paths.

On the periphery of every field were poplar trees with translucent green leaves on the tops. If you have lived in this area only then you can realize the beauty of this area and sturdiness of the people.

My mind flashed back and I thought how once Mughal kings and their generals must had roamed in this area. Before their coming here, petty Hindoo fuedatories were there and they were always fighting between themselves. This lack of unity undone them.

Then came the British. The East India company established the army cantonments in Meerut and Ambala which employed these hardy people as the soldiers. These people belong to Aryan race and are the fairest and strongest in India. Aryans first established themselves in Punjab between Sind river and 5 rivers. The increasing pressure of population and cattle drove them towards Ganges valley which was even more fertile than Punjab.

First city to arrive at was Meerut which still is the big cantonment of Indian army. Then Muzzafarnagar, shaharanpur, Roorkee and Haridwar followed. There was no change in the scenery of wheat fields till we crossed into Saharanpur and you could see for miles the mango gardens in the bloom. Soon they will bear delicious mangoes like Dushehri which is so sweet.

After crossing the Haridwar, we entered into woods. The trees were sprouting new leaves which were coppery colored and soon shall become greener. At 1240 hrs we arrived in Dehradun.